Located in the deep southwest along the borders of Arizona and Mexico, Hidalgo County began as farming, ranching, and mining communities long before statehood in 1912. With a population of 4,894 and an area of 3,445.63 square miles., it averages 1.4 persons per square mile. Hidalgo County was formed from Grant County in 1919, with the county seat in Lordsburg. It was named in honor of Miguel Dolores Hidalgo, who led the revolution in Mexico in 1810, which eventually led to its independence from Spain. Panoramic mountain horizons and spectacular views of the sky are only part of the county’s appeal. It boasts two ghost towns, a geothermal electricity generating plant, bird watching, ranch tours, and hiking.

Hidalgo County borders Mexico along 86 miles of its boundary. Grant County sits north and east, Arizona runs along the west. The area is known as the “bootheel” because of its location and shape. The county elevation runs from 4000′ to Gray Mountain’s peak at 6928′. The county includes 20 mountain ranges. Its lowest elevation is 3710′ and highest is 8444′. The Peloncillo Mountains that run through the county house 91 mammal species. The Gray Ranch in southern Hidalgo County has 75 recorded mammal species, more than are found in  Yellowstone Park! Of those, almost half are comprised of bats- about 29 species, of which 18 are found in the Animas Mountains  alone.
The mountain ranges in southern Hidalgo County and Arizona are referred to as “Sky Islands,” since in their upper, cooler and wetter  elevations they produce different plants than in the valleys below.  At lower altitudes, desert species such as cacti, mesquites, and  creosote bushes thrive, while scrub oaks, junipers, and pines grow  at higher elevations. This leads to diversity of not only plants, but also wildlife.
There are common sightings of  mountain lions, bobcats, javelina, coyotes, dozens of bird species, and many reptile, insect, and  amphibian species.  Even jaguars have been reported in areas  adjacent to Mexico. The county also claims the only white-sided jackrabbits and thick-billed kingbirds in the U.S..
Endangered species sighted or established in the county include the Mexican Gray Wolf, New Mexico ridge-nose rattlesnake, the  lesser long-nosed bat, Mexican long-nosed bat, ocelot, jaguar, coatimundi, and Mexican spotted owl.

The largest populated town is the county seat, Lordsburg, which is home to about 2880 people. There are widely scattered farms and ranches in the county, which averages residents to less than one per square mile. There are only two school districts in the county, one centered in Lordsburg and one in Animas. Both pull students from surrounding areas. There are two Post Offices, twenty-four churches, and five cemeteries.

Bird watching in Hidalgo County and neighboring areas is incredible! More than 50% of bird species in North America is found in southwestern New Mexico and southeastern Arizona.

Farther toward Rodeo (right at the NM – AZ state line), visit the Hideout Ranch, which specializes in horseback tours of the area.

Steins was established as a stop on the Butterfield Overland Stage route in the mid 1800’s. When the Civil War began, Congress closed the stage line. The Army set up a communication station in Steins to signal news about Geronimo and other renegades. Later, the Southern Pacific Railroad built a work station in Steins, which sustained it until trains switched to diesel after WWII. The town then vacated.

Shakespeare is 2.5 miles from Lordsburg and offers an authenic look into the mining era of the past. Thriving as an overland mail stage stop, a mining town, and the only point of merchandise sales in the area, it died with the arrival of the railroad (three miles away) which began Lordsburg and the closure of mines in the 1893 depression.

The museum is growing monthly with new donations by residents, both past and present. It is non-profit, free, and operated in part by volunteers. It contains thousands of artifacts, photographs, and equipment dating back to the late 19th century. 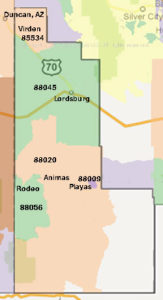